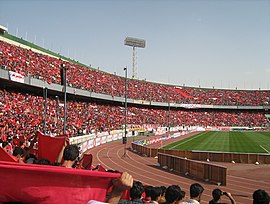 It will be extremely tough match. Al-Sadd are not scared of crowd in Azadi, the proof is they beat Esteghlal 3-1 last month. Few players play with injury.

Persepolis will host the Qatari football team on Tuesday in Tehran’s Azadi Stadium.

Alishah suffered a knee injury in the first leg against Al Sadd in Doha on October 2.

Persepolis faces shortage of players due to the transfer bans in the last two windows.

Persepolis has defeated Al Sadd 1-0 in the first leg and needs only to avoid defeat to qualify for the final match.
Source: https://www.tasnimnews.com/en/news/...polis-midfielder-alishah-misses-al-sadd-match

Alishah will most likely be fit for the match.
Likes: OSTAD POOYA

​
Qatar’s Al Sadd have a tough task on hand when they face Iran’s Persepolis in their AFC Champions League second-leg semifinal on Tuesday, 23rd October. The match will kick off at the Azadi Stadium in Tehran at 18.00.

Al Sadd’s task is difficult, but certainly not impossible. The Wolves have to overturn a 0-1 defeat they suffered at home in the first leg. They went down to an Ali Alipour’s late penalty goal.

The away goal gives Persepolis a slight advantage, but Al Sadd have the experience and players to put it across the rivals and storm into the final.

Al Sadd, who had emerged as Asian champions in 1989 as well as 2011 and went on to finish third at the Club World Cup in 2011, had ended up runners-up behind Persepolis in Group C this year.

Persepolis knocked out Al Jazira in the Round of 16 and claimed a remarkable come-from-behind victory over another Qatari side Al Duhail in the quarterfinals.

Al Sadd had defeated Persepolis 3-1 when they faced off in Doha in the group stage this year.

The top QNB Stars League side may have the services of defender Ibrahim Majed, who was missing in action since their 1-1 draw with Al Gharafa in Week 3 of this season’s QNB Stars League with a torn muscle. He had been undergoing a rehabilitation programme.

However, they will miss regular goalkeeper Saad Al Dossari due to suspension.

Meanwhile, Persepolis are aiming to become the first team from Iran to reach the final since Zobahan in 2010.

Their captain Jalal Hosseini believes the absence of injured defender Hossein Mahini will make things difficult for them despite the 1-0 lead on aggregate.

The Iran international full-back suffered a season-ending ACL injury in a league match against city-rivals Esteghlal at the end of last month, forcing Persepolis to put out a makeshift backline in the first leg against Al Sadd in Doha.

So the line-up will be(if Alishah is not fit), if yes he will play instead of Mosleh most likely...

Resan lost his mom last week, Persepolis needs him more than anyone, he is their key player, he most likely will not be mentally ready, even though all Persepolis players and the management showed their support to him and Garshasbi traveled to Baghdad for the ceremony.
Resan in a post appreciated what Persepolis has done for him in such a difficult time:
http://instagr.am/p/Bo7T6WzF9Tk/
This is from Hazfi match few days a go, in support of Resan:

This is probably one of the most crucial match in our football in last 4-5 years.

Babr said:
Ageh Persepolis be final naraft, hamoun Asaei ke be gofteye Tymsar Salman to mahtahte amou zadash kardo bayad to Matahte Taremi bekonan...
Click to expand...
Why Taremi and why now ? that sould have been done after his miss against Portugal ,Spain ...

Arash Taremi or Mehdi Borhani ….I am getting confused .

Good luck to them ,hope they reach where we got to 50 years ago ….
Likes: Payandeh Iran

Good luck to them ,hope they reach where we got to 50 years ago ….
Click to expand...
Hehe! I love these kinds of support. Toosh zahretam mipashi.

Payandeh Iran said:
Hehe! I love these kinds of support. Toosh zahretam mipashi.
Click to expand...
It's motivation, just to remind them again what they have been waiting for 50 years.. To reach, it has been a long time ambition! 😍
Be gholleh Ghaatebeh :ay Naderost e aallam! 😍
Likes: Payandeh Iran
P

the bookies expect the reds to play for a draw.
al sadd is a very slight favorite in the match.

Playboy said:
the bookies expect the reds to play for a draw.
al sadd is a very slight favorite in the match.