Houman, you should post something with your facebook links. Facebook is a very kiri site that loads very slowly and without some info about what you're posting, there's no incentive to click.
Likes: Payandeh Iran and houmanbahal

View attachment 42578
Click to expand...
VVD got my vote. What an amazing CD he is.
Likes: Hooshmand

Bruna Fernandes has been linked heavily with top clubs in EPL United Spurs Arsenal and Liverpool but yet to join one. Wonderful player I really hope LFC sign him but I doubt it.


https://twitter.com/statuses/1157534397303836672
Click to expand...
This is one of the funniest situations ever!
Every single Man U fan is literally begging for his arrival and praying for Lukaku to leave, yet Dybala wants to stay at Juve and Juve is treating their most promising superstar like a piece of trash!

I have a feeling there's going to be massive disappointment for every single party in this fiasco. Man U fans will realize Dybala is not 'all that'. Juventus will learn what a shit deal they made. Lukaku will see a massive decline in his career and Dybala will end up taking an offer from China after multiple injuries and a shitty season at Old Trafford!

I hate italian football specially Juve but one thing i know for sure: they know players. If Juventus cant wait to offload a player, i wouldnt go near that player until i know exactly about the redflags attached to him. Health, mental, attitude, personality stuff...forget about dybala.
Likes: Bache Tehroon and Hooshmand
P

pep gets the honor of being the first ever manage to get a yellow card
under the new rules. 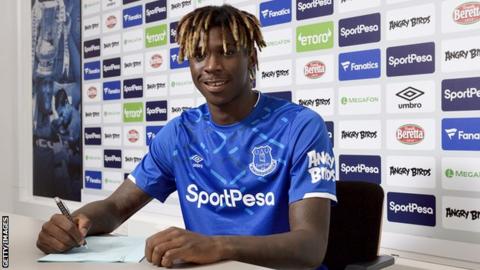 Moise Kean is Everton's fifth signing of the summer transfer window
Everton have signed Juventus' 19-year-old Italy international forward Moise Kean on a five-year deal.
Kean has scored eight times in 21 games for Juve, who he joined aged 10, and has struck two goals in three Italy matches.
He becomes Everton's fifth summer signing, joining for an initial fee of £25.1m that could rise to £27.5m.
"I am very proud and honoured to wear the Everton shirt. I will give my best to this team," said Kean.
"I was convinced to sign because Everton is a club looking to the future and so am I. I know about the size of the club. It has big ambition and I will work very hard to help us fulfil what we want to achieve.
"I am used to winning and I want to bring this winning attitude to the team."
On signing Kean, Everton manager Marco Silva said: "A striker was one of our priority signings this summer.
"Moise is strong, fast, with many good qualities as a striker and he is just 19 years old. He has talent and he is ready to work, ready to improve our squad and gives us different solutions."
Likes: takbetak
T

When he talks people listen.

Iksanihc said:
I hate italian football specially Juve but one thing i know for sure: they know players. If Juventus cant wait to offload a player, i wouldnt go near that player until i know exactly about the redflags attached to him. Health, mental, attitude, personality stuff...forget about dybala.
Click to expand...
Looks like Man United are pulling the plug on Spartacus.

Looks like Man United are pulling the plug on Spartacus.

https://www.skysports.com/football/...-interest-in-paulo-dybala-over-player-demands
Click to expand...
he wanted 300k a week. that's way too much. I hope we can get Bruno!
P

Wayne Rooney has agreed a deal to leave Major League Soccer side D.C. United and take up a role as a player-coach at English second-tier club Derby County in January.

The former Manchester United forward moved to MLS from Everton in June 2018 and has scored 25 goals in 45 appearances.

Very disappointed in Liverpool and Klopp, all the top EPL teams including City have signed big players and we have signed a 17 yr old Dutch defender and a reserve keeper(Adrian) and we are linked with players like Dorukhan Tokoz that's very worrying! I wonder how we gonna challenge a far more stronger City this season!!!
Last edited: Aug 6, 2019