in venezuela gas was 'essentially free' according to the report.
that's not sustainable even in a socialist economy.
i am sure iran gave them the advice and they were smart enough
to listen and raise the price to 2.5c a liter.
P

good news for all americans.
with the knee of aipac off their neck maybe they can breath a little easier for a while.


WASHINGTON – The American Israel Public Affairs Committee (AIPAC) announced on Sunday it would cancel its 2021 policy conference due to COVID-19. The organization’s president, Betsy Korn, sent an email to members, in a message marking the first time the event will be canceled.

Playboy said:
in venezuela gas was 'essentially free' according to the report.
that's not sustainable even in a socialist economy.
i am sure iran gave them the advice and they were smart enough
to listen and raise the price to 2.5c a liter.
Click to expand...
true.

Venezuelans, like Iranians are quite entitled oil-slaves too. Their productivity is next to zero even in good times. These countries with insane subsidy programs would've had a very tough few decades even without US sanctions. Now they're just trying to survive a hurricane with an umbrella.

An independent autopsy into the death of George Floyd found that his death was a homicide and the unarmed black man died of "asphyxiation from sustained pressure."
The autopsy says compression to Floyd's neck and back led to a lack of blood flow to his brain.
Floyd was essentially "dead on the scene" in Minneapolis on May 25, said Ben Crump, attorney for the Floyd family. Multiple videos of Floyd's death show former police officer Derek Chauvin's knee on Floyd's neck, along with other officers kneeling on his back.
Chauvin had his knee on Floyd's neck for 8 minutes and 46 seconds in total and two minutes and 53 seconds after Floyd was unresponsive, according to a criminal complaint released by the Hennepin County Attorney's Office.


"The ambulance was his hearse," Crump told reporters Monday. "George died because he needed a breath. He needed a breath of air."
"There is no other health issue that could cause or contribute to the death," said Dr. Michael Baden, one of the independent medical examiners. "Police have this false impression that if you can talk, you can breathe. That's not true."
A homicide is the death of a person caused by another person. It includes murder and manslaughter.
Chauvin is charged with third-degree murder and second-degree manslaughter. Crump said he should be charged with first-degree murder.
The independent autopsy's findings come after the Hennepin County Medical Examiner found "no physical findings" to "support a diagnosis of traumatic asphyxia or strangulation," according to the criminal complaint.
Preliminary autopsy results cited in the complaint said combined effects of being restrained, any potential intoxicants in Floyd's system and his underlying health issues, including heart disease, probably contributed to his death. Toxicology results can take weeks.
Floyd's cause and manner of death remain pending and is being investigated by local, state and federal law enforcement, the Hennepin County Medical Examiner's Office said in a statement.
Likes: Playboy
P

good job by fm spokesman in iran throwing back
at fat mike and his gucci gucci spokeswoman what
they have been dishing out at them.

^^^Making himself a laughing stock and showing the entire IR system is clueless. yes he did a great job at that
P

I saw a lot of disturbing videos last night.
I hope to god they were old ones.

In Philadelphia protesters were corned in a corner by cops. and they were hurling canisters at them.

over night in buffalo somebody ran over some cops.

I think i saw in NY a car do a hit and run as well.

This whole episode will probably make things worse over time because cops and the communities will develop a deeper mistrust.
P

no justice, no peace.
uncivil war is coming to a 'hood near you!

blaming china, iran and russia for systematic racism and hate
is not gonna cut it with the millennials.
trump and his gang are the perfect extremists to create martyrs
and start a real american revolution. 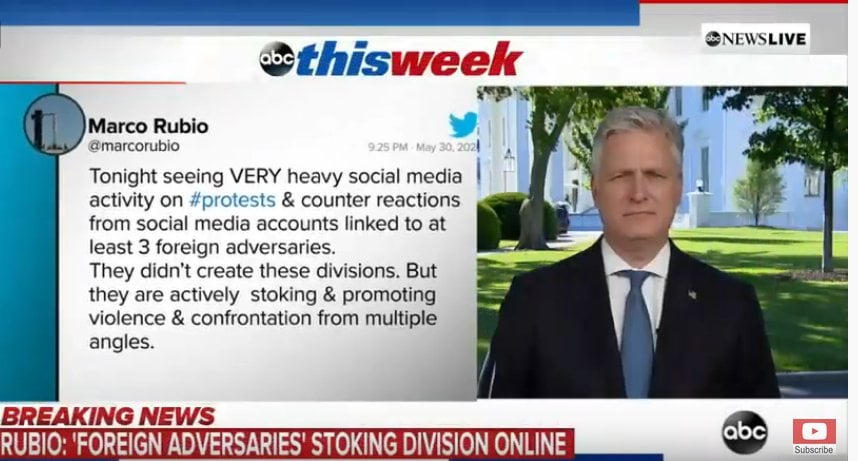 Playboy said:
no justice, no peace.
uncivil war is coming to a 'hood near you!

blaming china, iran and russia for systematic racism and hate
is not gonna cut it with the millennials.
trump and his gang are the perfect extremists to create martyrs
and start a real american revolution.

Click to expand...
The best thing about Trump was he fucked up Ted Cruz, Rubio and Jeb Bush.

Now Rubio is back to the well that feeds him (neo-con-sim)
Likes: Playboy

NO JUSTICE, NO PEACE !

no justice, no peace
f the fascist POElice

The defense secretary says he does not want active-duty troops used on the streets for now.

Defense Secretary Mark T. Esper said Wednesday that he does not think the current state of unrest in American cities warrants the deployment of active-duty troops to confront protesters, just days after President Trump said he was considering use of the Insurrection Act to do exactly that.
In a Pentagon news conference, Mr. Esper said ordering active-duty troops to police American cities should be a “last resort and only in the most urgent and dire of situations.” He said that, for now, this was not warranted.
About 1,600 airborne troops and military police have been ordered to be positioned outside the capital, officials said Tuesday night.
Officials said that Mr. Trump had discussed the invoking the Insurrection Act, but had been dissuaded by Gen. Mark A. Milley, chairman of the Joint Chiefs of Staff, and Attorney General William P. Barr.
Mr. Esper also acknowledged on Wednesday that he did know beforehand that he was accompanying Mr. Trump to St. John’s Church in Washington Monday evening, changing his initial assertions that he was unaware of his destination when he joined the president for a walk across Lafayette Square for a photo op after authorities tear-gassed protesters to clear the way.
Mr. Esper said after the much-criticized photo op that he was unaware of his destination when he set out with Mr. Trump for what he thought was a visit to view troops near Lafayette Square.

Liberal run New York! LOL! They voted for this.

This is how you honor George Floyd. In a Rolls Royce of all things:

In honor of George Floyd