trump calls for execution of this guy with a quick trial.
the un-civil war is getting hot

Trump said the shooter, who fired through the cruiser window at the officers, were “Animals that must be hit hard!” He added in a second tweet a call for a “quick trial” and “the death penalty” if the officers die.

Tensions have been high in the South Central Los Angeles area since Aug. 29, when 29-year-old Dijon Kizzee was shot and killed by L.A. County Sheriffs in a confrontation while he was riding a bicycle. His death has sparked several days of protests in that area.

After the Saturday night shooting of the L.A. Sheriffs, a crowd gathered outside St. Francis Medical Center in Lynwood, where the shooting victims were taken. The crowd blocked the emergency entrance and exit and chanted “we hope they die,” the sheriff’s department said in a tweet. A reporter from LAist.com was arrested by lawmen attempting to disperse the crowd.

An oil tanker is discharging Iranian condensate for Venezuela as both countries continue to avoid U.S. sanction tripwires.

The ship is identified in internal documents as Honey, according to a report and a person with knowledge of the situation. The tanker’s actual name is Horse, according to a document. The Iran-flagged supertanker, which turned off its satellite signal on Aug. 7, started unloading about 2 million barrels of South Pars condensate at Venezuela’s state-controlled port of Jose on Saturday.

The cargo will most likely be used by the state oil company Petroleos de Venezuela SA to blend with Venezuela’s tar-like crude and help prop up production in the Orinoco oil belt.

iran hits back at the usa for claiming they planned to hit a low level
ambassador in retaliation for general soliemani's assassination.
in particular they single out fat mike as the self acknowledged.
liar and cheater that he is: 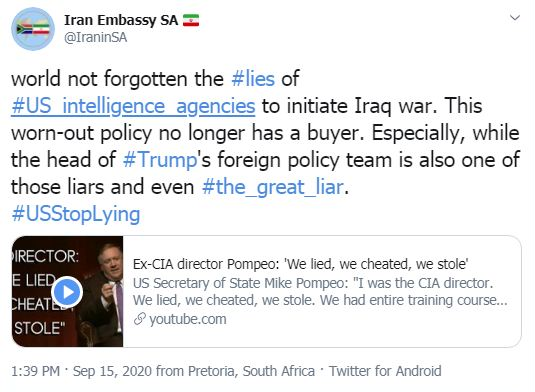 meanwhile trump goes on a rant of his own:

Donald Trump has warned that the US will retaliate with “1,000 times greater” force against any Iranian attack on its interests.

On 8 January 2020, in a military operation code named Operation Martyr Soleimani (Persian: عملیات شهید سلیمانی‎),[5] Iran's Islamic Revolutionary Guard Corps (IRGC) launched numerousballistic missiles at the Ayn al-Asad airbase in Al Anbar Governorate, western Iraq, as well as another airbase in Erbil, Kurdistan Region, in response to the killing of Major GeneralQasem Soleimani by a United States drone strike.[6][7][8] While the U.S. initially assessed that none of its service members were injured or killed,[9][10] the U.S. Department of Defenseultimately said that 110 service members had been diagnosed and treated for traumatic brain injuries from the attack.[11]

So much pain and suffering

Lukashenko has closed borders with Poland and Lithuania, underlining repeated claims protests are driven by the West.

Belarus's president, beleaguered by six weeks of mass protests demanding his resignation, has announced he is putting troops on high alert and closing the country's borders with Poland and Lithuania.

President Alexander Lukashenko's decision on Thursday underlined his repeated claim that the wave of protests is driven by the West. He faces increasing criticism from the United States and the European Union.

Protests began after the disputed August 9 presidential election. Official results gave the authoritarian leader a sixth term in office but opponents say the results were manipulated.

"We are forced to withdraw troops from the streets, put the army on high alert and close the state border on the west, primarily with Lithuania and Poland," Lukashenko said at a women's forum.

Lukashenko also said Belarus's border with Ukraine would be strengthened.

"I don't want my country to be at war. Moreover, I don't want Belarus and Poland, Lithuania to turn into a theatre of military operations where our issues will not be resolved," he said.

"Therefore, today in front of this hall of the most beautiful, advanced, patriotic people I want to appeal to the peoples of Lithuania, Poland and Ukraine - stop your crazy politicians, don't let war break out!"

He did not mention neighbouring Latvia, which like Poland and Lithuania is a NATO member.
F

May I please ask that screen shots of twitter are posted? Always says the page is unavailable for me and I assume, it's because I'm not logged in, which is of course terrible error handling, which is even more reason not to direct traffic to their site?
Likes: Bache Tehroon and rahim

Farz said:
May I please ask that screen shots of twitter are posted? Always says the page is unavailable for me and I assume, it's because I'm not logged in, which is of course terrible error handling, which is even more reason not to direct traffic to their site?
Click to expand...
Sure
Not a problem
Likes: Farz

Farz said:
May I please ask that screen shots of twitter are posted? Always says the page is unavailable for me and I assume, it's because I'm not logged in, which is of course terrible error handling, which is even more reason not to direct traffic to their site?
Click to expand...
Twitter and Instagram are clear examples of why humans are such shitty creatures.

Iran-Esteghlal-Inter said:
So much pain and suffering


https://twitter.com/statuses/1306650289739624453
Click to expand...
They didn't even deliver his body to his family or let them see his face before burial, which is customary in Iranian burials. They informed them few hours before to come to the cemetary and just witness. They brought the body in a hurry and buried it before anyone could see the signs of the torture on his body.

He is not the first and won't be the last.
F

Bache Tehroon said:
Twitter and Instagram are clear examples of why humans are such shitty creatures.
Click to expand...
Haha and there's no shortage of examples!
P