Iran-Esteghlal-Inter said:
because this could lead to war.
Click to expand...
Nah I think IR cleverly (in reality in a stupid way) is pushing things in gulf. They talk from both side of mouth too in regards to nego.

Ghonbol ghahremananeh is where it's at. Oscar goes to sed-Ali bending over and the pro-IR ISP gang clapping for it.

Iran denies the drone incident ... And they said they will provide images to prove it.

It does not matter.

Iran's drones dont cost any more than 100K to build.

Iran would not care either way. if it did get shutdown, it is learning opportunity for them.

if it did not they got more images to look at.


unfortunate too many Iranian bretheren don't quite understand that in the Mordern day there is alot of headline noise.

most of the news does not matter. because of most of the actors are rational actors (self interested animals)
P

Iran-Esteghlal-Inter said:
Iran denies the drone incident ... And they said they will provide images to prove it.
Click to expand...
Whatever they deny = Without a doubt it happened.
Likes: Bache Tehroon and Behrooz_C
P

as promised irgc has just announced the take over of the british oil tanker stena impero.
don't mess with iran.

Trump is letting IR get away with all this shit and once the Euros start to understand the seriousness will collect money from them to protect their ships. That's when the IR will back down. The "talk" with UK is just that.
P

maybe trump just wants to chat with the british defence minister.
we know he has the hots for blonds 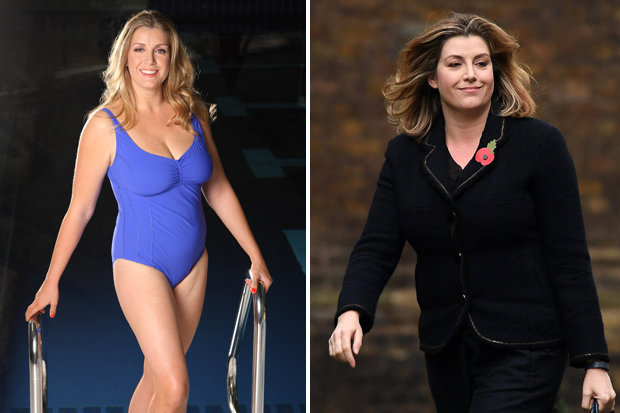 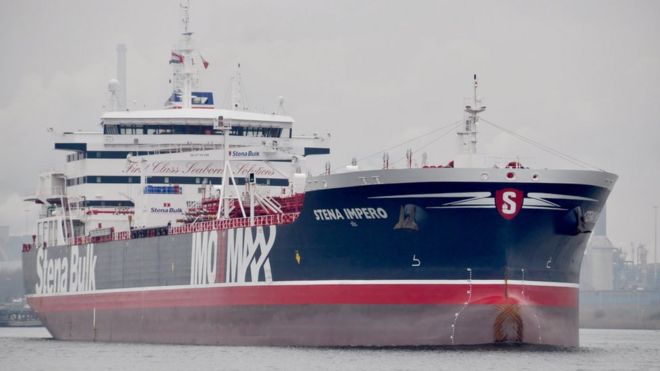 Image copyrightERWIN WILLEMSE
Foreign Secretary Jeremy Hunt has said he is "extremely concerned" by the seizure of two tankers by Iran.
The Stena Impero is British-flagged and the Mesdar is Liberian-flagged but British owned.
The Mesdar's operator said the vessel was now free to continue its journey after it was boarded by armed guards at around 17:30 BST on Friday.
The Stena Impero's owners say they have been unable to contact their vessel, which was "heading north towards Iran".
They say there are 23 personnel on board the British-flagged oil tanker and it was approached by "unidentified small crafts and a helicopter".
The Mesdar's Glasgow-based Norbulk Shipping UK said communication had been re-established with the vessel and its crew was "safe and well".
The government's emergency committee, Cobra, is meeting in Whitehall for the second time on Friday to discuss the incident.
Mr Hunt said the seizures were "unacceptable" and the emergency meeting would review what the UK could do to "swiftly secure the release of the two vessels".
"It is essential that freedom of navigation is maintained and that all ships can move safely and freely in the region," he added.
He said the tankers' crews were made up of a range of nationalities but no British citizens were understood to be on board either vessel.
"Our ambassador in Tehran is in contact with the Iranian Ministry of Foreign Affairs to resolve the situation and we are working closely with international partners," he said.
These latest developments come amid heightened tensions between the UK, the US, and Iran.

Zob Ahan said:
Trump is letting IR get away with all this shit and once the Euros start to understand the seriousness will collect money from them to protect their ships. That's when the IR will back down. The "talk" with UK is just that.
Click to expand...
Let's put ourselves in Trump's shoes:

What's in it for him either way?! Absolutely nothing.

If he starts engaging Iran, he'll get grilled by the house and risks the election. Immediately after engaging Iran, those fuckfaces in Europe will all start whining when in reality, it's THEM who should be confronting Iran.

If he refuses to engage Iran, he'll get grilled by house and senate (for different reasons) and he'll also damage US's image.

As you said, the logical business move is to charge money for the grilling he'll have to endure either way. Right now, he's taking offers from both sides it seems. This might turn into a nice new revenue stream for the US military.

Meanwhile, the file case against Iran keeps getting bigger and bigger. Soon enough the entire NATO will be discussing a war against Iran.
Likes: Zob Ahan

Germany and France condemned the tanker incidence. Those few friends in Europe are also have to turn their back sometime soon.

While this is happening all CNN is focusing on are those 4 clowns in Congress.
Likes: Bache Tehroon

Zob Ahan said:
While this is happening all CNN is focusing on are those 4 clowns in Congress.
Click to expand...
CNN is the most hated network in America right now. Their ratings are so low it's become an emergency. Trump used this to his advantage very smartly. The left has completely lost it.
Likes: siavash_8

Bache Tehroon said:
CNN is the most hated network in America right now. Their ratings are so low it's become an emergency. Trump used this to his advantage very smartly. The left has completely lost it.
Click to expand...
It is Bill Clinton years all over again. Back then there was a witch hunt mostly by Fox and it backfired and slick Willie won and this time it is Trump and CNN and it will backfire once again. At least last time it wasn't as boring with Monica and all.
Likes: Bache Tehroon

A8K said:
Nah I think IR cleverly (in reality in a stupid way) is pushing things in gulf.
Click to expand...
hAji bamboo jammer, the bloody fuck is "gulf"?
gulf my fuckin ass!
Its been PERSIAN GULF, it remains PERSIAN GULF.
God, thanks I am out for my bike riding this weekend, see you in 40 days. chao humbre!

Iranian say the British tanker hit a fishery vessel then they say that it was not following international rules and now they say it is for retaliation for Iranian tanker.

Arash_Tombangir said:
hAji bamboo jammer, the bloody fuck is "gulf"?
gulf my fuckin ass!
Its been PERSIAN GULF, it remains PERSIAN GULF.
God, thanks I am out for my bike riding this weekend, see you in 40 days. chao humbre!

Click to expand...
Cool off, I buy you a gulp size drink at 7-11. Happier?? Whatever it is, is under seize and with IR fucked up style of management it may be the gulf of Chernobyl in years to come.
Last edited: Jul 22, 2019
Likes: Zob Ahan

Boss and servant have managed to fool iranians once again by setting up one of their countless war scenarios in the last 40 years where iranians started to say "indafe dige jange". There is no war between the US and IR brother. There is no benefit for the IR to have a full scale war against the US and there is no benefit for the US to get rid of their own self constructed isolated and shia enemy and looloo khorkhore in the middle of a sunni region. Countries who are spending hundreds of milliards of dollars because of their fear of the IR expanding their shia doctrine all over the region (which they are doing relentlessly). These are all manovers to keep up the level of shock and awe. This region needs to be kept in a constant fear of war and violation and the cash will come. Sure Trump is a much bigger puppet than Khamenei but he is a puppet himself nevertheless. Corps. tell him what to do and what to refrain from. Nothings happening, even if the IR downs a much bigger US drone or even jet, the US is ok with that aslong as it makes sure the plans keep working. Many people have forgoten that the same IR has attacked the US base in Saudi Dhahran years ago and killed many US army members and the US government did everything to bail out the IR and white wash them while US courts had already and clearly proven that it was the IR rockets that targeted the US base but at the end the US government didnt even blink and simply ignored the rule of their own courts. Never forget, who is able to plan and organize a flase flag action and kill 3500 of his own people and down two of their own towers just in order to setup a war to impose on Iraq (who never had anything to do with those things), is capable of sacrificing and victimizing own drones, planes, ships, soldiers, citizens...anytime and anywhere if it helps keeping up the plans. US government doesnt care about US citizens, US government is hijacked long ago, their senators and congressmen get bribed on regular basis to raise their hands and serve the interests of the corps and some other powerful elements. US government has actually become the executing arms of bunch of faceless organizations and corporations and those organizations and corps dont have an interest in a war against IR. They are making money by keeping the fear level of countries afraid of IR and those countries are a lot richer and are willing to spend endlessly to BUY and PAY for their security. Why get rid of such an excellent looloo khorkhore? IR has been money for the US since day one. This cow has still alot of milk and they milk it.

In khar kosse haa, whenever iranians hit the streets and threaten the IR, they went mute and even called the same IR a democracy refusing to help iranian people in any way. In such cases they just stay out and watch the IR beat up on their own people and sort things out. This should show you they are not after removing IR. They have never been, they need IR the way they are: Strong enough to stay at charge and put fear in heart of those rich sunni arabs but too weak to be anything more than that.
Last edited: Jul 28, 2019
Likes: Behrooz_C, rahim, Bache Tehroon and 1 other person
You must log in or register to reply here.
Share: Facebook Twitter Google+ Reddit Pinterest Tumblr WhatsApp Email Link