Pooya said:
yeah , thats what i remember as well. honestly its BS , US is going to win it every time !
Click to expand...
That won't be the case every time. There are more and more international players in the NBA , Spain has 9 NBA players so the gap is slowly closing. The US did use NCAA players in the past and they didn't do as good. Plus , there is too much money involved with endorsements for the US not to use NBA caliber player.

Sly said:
Or maybe this was just a "one time event" for both China and UK. But I understand what you mean! Of course if the authorities don't care about our athletes, we'll have no chance of reaching anywhere even if we could.
Click to expand...
Alia jan, let's hope for much better result in Tokyo 2020....


all the best wishes duste aziz.


all the best wishes duste aziz.
Click to expand...
Chakeram Bardia jan! The same to you.

Sly said:
Does that count? I thought it was only knees and back/shoulders. I think Ashtar is right though. his knee touched the mat right before that moment.
Click to expand...
Of course it does!
We could discuss it back and forth, in and out for years to come.
But the rules are strictly clear in this case;
2 POINTS
Yasdani's opponent bounced the butt twice on the mat when he had both of his hands on the mat, that means "2 Big Points".
The case where his knee during nanoseconds hits the mat is difficult to detect, but when his fat ass bouncing on the mat not once but twice is very obvious!

Sly said:
From what I remember I think that was the case many years ago. NBA players were not included in the Olympics but started to be included back in the 90's, after some drawbacks! I think they wanted to secure the gold medal every time.
Click to expand...
Traditionally composed of amateur players, a 1989 rule change by FIBA allowed USA Basketball to field teams with professional players. The first such team, known as the "Dream Team", won the gold medal at the 1992 Summer Olympics in Barcelona, being superior in all matches.[3][4][5]

With the introduction of professionals, the team was able to spark a second run of dominance after capturing only a bronze medal in 1988. A team of professional players competed at the 1994 FIBA World Championship, finishing first. In 1996, 2000, 2008, 2012, and 2016 the USA again captured gold medals at the Olympics.

Facing increased competition, the USA failed to win a medal at the 2002 FIBA World Championship, finishing sixth. The 2004 Summer Olympic team lost three games on its way to a bronze medal, a record that represented more losses in a single year than the country's Olympic teams had suffered in all previous Olympiads combined.

Determined to put an end to these failures, USA Basketball initiated a long-term project aimed at creating better, more cohesive teams. The USA won its first seven games at the 2006 FIBA World Championship in Japan before losing against Greece in the semi-finals, ending the competition with the bronze medal. The USA won gold two years later, though, at the 2008 Summer Olympics with a dominant performance. This success was followed up at the 2010 FIBA World Championship, where despite fielding a roster featuring no players from the 2008 Olympic team, the USA did not lose a single game en route to defeating host Turkey for the gold medal. The USA continued this streak of dominance by going undefeated and capturing gold once more at the 2012 Summer Olympics, 2014 FIBA Basketball World Cup, and 2016 Summer Olympics.

Look like the referee of match between Reza Yazdani and Khetag Gazyumov got suspended after Iran's complain and review of video of the match.

Analysis of Greco-Roman results, so Bana basically took a team without paying attention to Entekhaabi matches results before Olympics as i said before.

Hope he learnt a lesson or two...

So many gifts as a sign of appreciation for Kimia Alizadeh!!! If they really give her everything they promise, it's really awesome! Dameshoon garm!

Did anyone know Kianoush Rostami was his own coach, he said Anoushirevani and the rest of coaching staff method's in Iran is so outdated, he asked the federation to let him be his own coach and they accepted and we know the result. Interesting.. He said i wouldn't come back with medal if i wasn't my own coach. 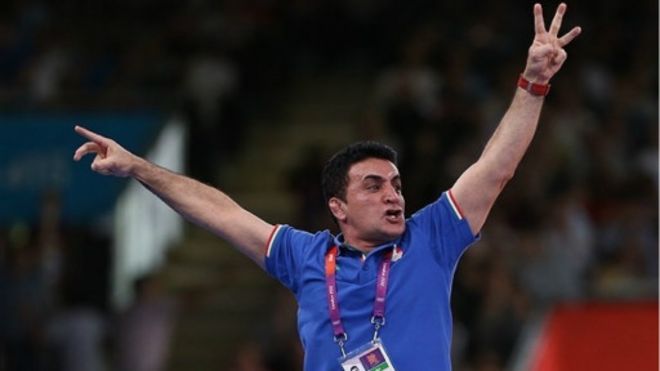 He is a great coach but in gar kardanash badtar az CQ shode. You can't select a squad without Entekhaabi matches, that is stupid.. How you want motivate young wrestlers to even compete??

houmanbahal said:
Paralympic starts tomorrow.. I would expect to see more medals here..
Click to expand...
Probably use this thread for Paralympics

Saeid Mohammadpour who was 5th in 2012 Olympics in the 94kg weightlifting is going to get a GOLD in retrospect.

Because the four lifters who ranked ahead of him have ALL tested positive. As well as the two weightlifters below him. Unbelievable:

Unfortunately he had an elbow injury so missed out in this olympics.

I was about to post same article in Farsi, that put Iran in 15th place with 5 golds. The guy is only 24 and can compete in next Olympics. Weightlifting is so corrupted with all these doping. Only clean athletes in last decades have been Iranians because the federation has a high control on them..

Did they test positive in Rio or London? It took 4 years to find out they tested positive?

Bache Tehroon said:
Did they test positive in Rio or London? It took 4 years to find out they tested positive?
Click to expand...
London!
Essentially I think the elite nations have been doping for years. They're just so damn good at it no one can detect (yet).
You must log in or register to reply here.
Share: Facebook Twitter Google+ Reddit Pinterest Tumblr WhatsApp Email Link