Unfortunately, there is no film link to this but a really good piece here by ESPN. 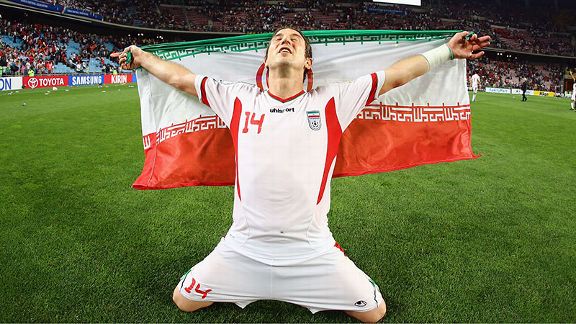 GettyImagesAndranik Teymourian of Iran celebrates qualifying for the FIFA World Cup.
There was the ball bouncing in the penalty area, there was a blur streaking past surprised defenders and suddenly, there was Andranik Teymourian, pony-tail swaying and old school wristbands flying. "Ando" he shouted by way of warning and claim, his nickname just one legacy of his days in England, and he was there and there was the ball, now nestling in the back of the net. His fellow Iranians clapped and the training session restarted -- whatever the situation, wherever the location, the midfielder puts heart and soul into it.

From Bolton to Barnsley to Brazil and then who can say? Teymourian helped Iran on a roller-coaster ride through qualification for the 2014 World Cup and is all set for the festival of football next summer and the challenge of taking Team Melli to the Promised Land. This is a country with a rich and ancient history, but reaching the knockout stage is something it has never done.

Doing things for the first time is not a problem for the 30 year-old. Back in 2006, East Asians were just starting to make their presence felt in England, but players from the western reaches of the continent were almost unheard of. Saudi Arabian legend Sami Al-Jaber had a (very) short spell with Wolverhampton Wanderers at the turn of the century and in 2000 there were literally 18 minutes and one touch of the ball for Iranian legend Karim Bagheri as a substitute for Charlton Athletic at Ipswich (the midfielder remains the club's most-capped player).

Iranian players had settled down in Germany to considerable effect. Surely Bayern Munich would have sealed the 1999 UEFA Champions League final victory against Manchester United had Ali Daei, the man who has still scored more international goals than anyone else, not stayed on the bench. Ali Karimi and Vahid Hashemian followed in Daei's Bavarian footsteps and 1998 World Cup hero Mehdi Mahdavikia spent years with Hamburg. Even the Minister of Defence Rahman Rezaei had a happy time in Serie A. But England? There was nothing.

It was down to Ando and Big Sam to sort that out. Sam Allardyce may still be regarded as the archetypal English manager but he was not afraid to cast his net wide. As well as bringing the likes of Jay-Jay Okocha and Ivan Campo to Bolton, he picked up Hidetoshi Nakata in the summer of 2005 and added Teymourian a year later (Big Sam also gave numerous Blackburn trials to South Korean stars), beating off clubs from the Bundesliga and Turkey. Allardyce was impressed by the all-action midfielder during Iran's 3-1 loss to Mexico in the opening game of the 2006 World Cup and a quarter of a million pounds later, he was on his way to England.

"It was a great experience to go to Bolton and they had some very good players," the midfielder told ESPN. "We were capable of beating anybody if we played to our best. Other teams did not always like playing us but we had a great team spirit and I learned so much."

His time in north-west England was up and down. He fought his way into the first team where his high point was two goals in three second half minutes to take three points at Wigan Athletic. Allardyce talked of big things ahead but when the boss left for Newcastle at the end of the 2006-07 season, it was the beginning of the end for the Iranian of Armenian descent. Under Sammy Lee, he played just once, and the situation did not improve under Gary Megson. He went to Fulham but admits that it was hard to break into a first team that was taking the Londoners to new heights at home and in Europe under Roy Hodgson. After a loan to Barnsley and an aborted attempt, not helped by an injury situation, to rejoin Allardyce at Blackburn, Teymourian headed home.

Now he is playing for Esteghlal. This Tehran giant sometimes attracts attendances that all English clubs can only dream of but even when playing in front of 100,000 fans, Teymourian wouldn't mind a second bite at the European cherry.

"It is an honour to play for Esteghlal but if I have a chance, I would love to go back. My time in Europe was the best days of my football life. It would have to be as a regular player and not as a substitute but I would take the chance to go back. The game in Asia is improving all the time but in Europe, the speed is faster and you have to think and move faster, that is the main difference." 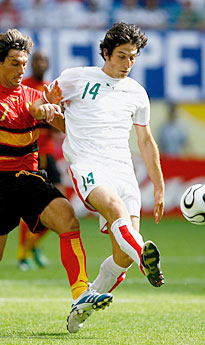 
History could repeat itself if he impresses at the World Cup. But he would swap it all for a chance to not to repeat the first round exit of 2006.

"We have been there three times and never got past the first round," he said. "The second round is our target, of course. Now all our focus is in how to qualify for the next stage. We will do everything we can in order to do that and it is the place where Iran wants to be."

Fourth time lucky? That remains to be seen. Argentina 1978 was a decent start in a tough group. France 20 years later featured a first win meaning that hopes were high eight years later, especially as the team had a very nice blend of youth and domestic as well as European experience.

It didn't go well with just a point from the three games against Mexico, Portugal and Angola. Teymourian was perhaps the best Iranian player in Germany but that is not a big a compliment as it should have been amid reports of dressing room splits around the big personalities of the two Ali's -- Karimi and Daei. Not only is he a very nice guy, he is wise enough not to talk about any of that stuff, though it is perhaps fair to see that the photo of him sprawled on the Leipzig turf at the end of the final game in tears sums up the way he felt at the time.

"It was a great experience and I learned a lot and I am hungry to experience it again. I really hope to stay in the team and go to Brazil. In Iran, we don't have many players who have the experience of two World Cups and the motivation for me to play for the national team at the 2014 World Cup is very big. The World Cup is the highest level of football and it is a great opportunity to compare yourself to the best players and the best teams in the world. It is a challenge that every player wants."

There are reasons to be cheerful. This Iranian team maybe does not have the flair or creativity or even the swagger of the 2006 vintage and preparations are not exactly going smoothly but it is solid, organized and well-drilled under former Real Madrid and Portugal coach Carlos Queiroz. Team Melli will be tough opposition next summer.

"We will have to wait and see what happens in the draw but all of the players are talking about which teams they want to play," he smiled. "For me, it is Spain. I would love to play against Spain. It would be a wonderful challenge."