Great come back, yet another 3-2 win over Poland.
Eyval
Likes: oghabealborz

polish coach and his team got punked good.
R

another great come back

Poles paid for their racist attitude of their captain.
If he was not suspended, things could have been different.

IRFF should take a note 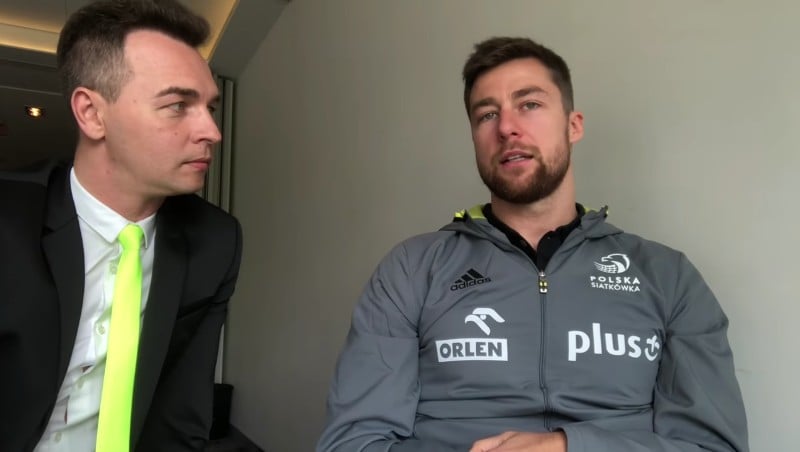 Michał Kubiak about Iranians
Captain of Polish national team was a guest of popular volleyball vlog in Poland: Prawda siatki. He was talking about many topics such as challenges of the starting season, competition for a place in the starting six and schedule of international matches. One of the topics was Iranian players.
He said:

They always play the innocent, they act like super and cool, and we are the worst. But my opinion is that they are fatal, malicious and boorish people. That nation is crossed out for me, despite the fact that they are proudly calls themselves Persians, not Arabs. But really they are simply loosers (in Polish "leszcz"). We have to play with them from time to time, but for me they don't exist. Ebadipour is fine? But what can he do if he came to us?​
Kubiak reminded about the situation in the final of Asian Club Championships 2018/19 where his team Panasonic Panthers lost with Iranian Matin Varamin. Kubiak was provoked by Pourya Fayazi. He told about this situation:

More and more rarely someone is able to get me out of balance, as was the case at that tournament. I don't have health for it, I'm also a little older, some things don't interest me anymore. But you have to do a lot of things to make me "warm up" the way I "warmed up" at that match. It all took place even earlier, because we played with this team in the group phase. This guy stood under the net, shouted at me, insulted my family and then he ran away and hid behind his teammates, when I approached him. I have lost all respect to the people of Iran. For me, they are invisible. Yes, I generalize the subject, for me it is one litter.​
Removing the video from the internet
There was a wave of criticism on the volleyball player. For this reason, Kubiak asked to remove the video from the Internet. It happened. The episode on the "Prawda Siatki" channel returned after a few hours, but there were no controversial words about the Iranians anymore.
Michał Kubiak issued a statement
There is a content of Kubiak's statement which was published on the Polish Volleyball Federation website:

Dear fans!​
Due to unnecessary media noise which was result of the interview I gave to Jerzy Mielewski in "Prawda Siatki", I declare that:​
First of all – like everyone else – I have the right to my own opinion.​
Secondly, I have the right and even the duty to answer when my family, my friends from the playground and myself are object of threats and insults from the opposing team's players and their aggressive fans. And such situations took place during matches with Iran national team.​
I strongly emphasize that the words that I said were directed only to people I personally dealt with, i.e. volleyball players and their chauvinist fans.​
I express regret that my words may have misunderstood. Maybe I spoke them in the wrong context. At this point, I would like to point out that I am so far away from xenophobic views that I have been credited for several days. Racism, lack of respect for national colors and opponents are unacceptable and invaluable to an athlete. At the same time, I have to emphasize that I do not change my opinions on Iranian volleyball players and fans who have insulted my family and friends.​
Sincerely,​
Michał Kubiak​
Captain of Polish Volleyball National Team​
Complaint of the Iranian federation to the FIVB
Temporary president of Iranian federation, Afshin Davari in the interview with Teheran Times said that he will refer a complaint to the FIVB in this matter:

FIVB's Ethics Committee should demand Kubiak explanation for his remarks. He has offended the Iranian people and must accept responsibility for what he has said.​
What threatens Michal Kubiak? If the FIVB's Ethics Committee decides that the Pole broke the rules, they may order a warning, a reprimand, a financial penalty up to 10,000 Swiss francs and a maximum half-year suspension.

Need to bet some quality sleep soon....but before that, one of the best TM volleyball players.

Ghafour #10, an excellent and outstanding professional volleyball player and he is Iranian.
I have seen many of fella TM volleyball's fights, I have never seen this compadre squeaking, whining, beefing or bitching, he even less ever never talking to the fella on the opposite side (this amazes me how this thin net keeps the players from grappling).

Anyway, he is cool as an Icelandic fella.
Where in Iran is he from?

Arash_Tombangir said:
Need to bet some quality sleep soon....but before that, one of the best TM volleyball players.

Ghafour #10, an excellent and outstanding professional volleyball player and he is Iranian.
I have seen many of fella TM volleyball's fights, I have never seen this compadre squeaking, whining, beefing or bitching, he even less ever never talking to the fella on the opposite side (this amazes me how this thin net keeps the players from grappling).

Anyway, he is cool as an Icelandic fella.
Where in Iran is he from?