Exciting end to the game and good comeback by Armenia scoring 2 late goals to win it and top the group with 9 points from 3 games.

Exciting end to the game and good comeback by Armenia scoring 2 late goals to win it and top the group with 9 points from 3 games.

Armenia beat the last 3 teams in the standings, let's see how they do against Germany and N. Macedonia.

this is a very exciting group

Surely the best result in NMacedonia/FYROM's history too...?

LOL @ Timo Werner. He can't hit a barn door with a banjo for club or country

I had to have a full 24 hours to cool down beore I posted about Die ou vs North Macedonia. Joachim Low, you had one job and you FAIELD. The team has-NO OFFENSE, Timo Werner needs 50 chances a game to score, @Behrooz_C -He creates chances but can't capitalise.
JK made a unilateral decision to get rid of:: Hummels, Boetang and most important of all, Thomas Muller, one of our two playmakers, outside of Toni Kroos. The DFB is setting up be it Klopp or Flick up for failure. I know our proverb of If and aunt and uncles having a mustache. However, if I were on the DFB board, i would SACK LOW NOW, pick Klopp and let him utilize the UEFA EUros as a preparation for WCQ Qatar. There needs to be a change, the definition of insanity is repeating the same thing. JL is a B level coach who succeded with A level talent in 2014. When that A level talent and players such as Bastian Schweinsteiger, Big Per Merterseker and Lucas wr left, there was a leadership vaccine.
In Russia those OG's were replaced with Sammy Khedira, Mesut Ozil, Thomas Muller- you had two groups the foreigners and the Bavarians. The Bavarians like Kroos would not pass it to the foreigners who were not good, only Bavarians like Muller who are good. Nowfor Low got rid of Muller and he still has gas left in the tank, no repalcement with spring chickens. #LOW RAST DIE MANNSCHAFT FUBALL prost.
Sorry flor a paragraph response but I had a difficult time sleeping, and I had a major root canal. I come home in time to watch Die Mannschaft lose to team Alexander the Great N Macedonia, WOW! We are reasonable we know we are not the old Die Mannschaft but we are not saying beat France or Belgium, beat North Macedonia, come on man! Thoughts from the farangi Die Mannschaft fuBall fans?
Last edited: Apr 1, 2021

@Kian Pars Judgement call, I have seen less get called, I have seen more get non called. Iran have been the beneficiaries of bad non calls on incompetent refs-see Iran vs Argentina- Serbian ref. The Iranian Team Melli captain did not throw his armband on the ground , in disgust. The refree is not going to GIVE the game to Portugal, on a judgement call. They had 90 minutes to score an extra goal but Serbia has a godo team as well and they put two in the back of the net as well. This is football, it happens.
What should not happen is Germany losing to N. Macedona because executive bad decisions such as not finding a replacement for Muller or having any offensive fire power, weakness in your defensive back four, giving up two to N. Macedonia. Those are inexcusable mistakes the Portugal well, you can fix them, in the next game just score more and don't be Portugal of the old, Ronaldo plus 10. Just my take.
Last edited: Apr 1, 2021

Behrooz_C said:
LOL @ Timo Werner. He can't hit a barn door with a banjo for club or country
Click to expand...
This is Chelsea's fault. They did the same thing with Morata. When he was there he was dropped from the national team too. Surprisingly, the lack of training worked wonders for Hazard, who has flopped at Madrid where players actually have to train properly. Pogba must be having the same problem at United with EPL "training."
Likes: TeamMeli

I've had never seen Luxembourgian-Balck in my life until now, that I call the doom of the world, see! 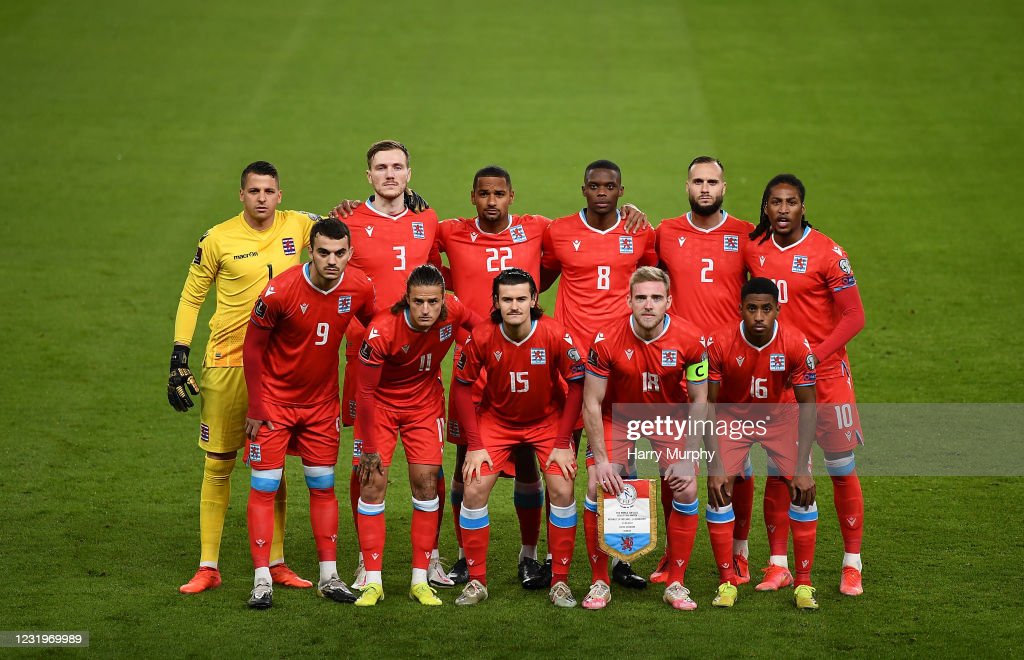 TeamMeli said:
I do not believe in that nonsense and anyone who doesis a nafam defevnia dahati racist. I am not going to waive a BLM flag but I will defend their right to life, liberty, and the pursuit of not getting killed for being black. #say no to racism, we are all Americans, we all bleed red, not only there is nothing wrong with being black, it should be celebrated.
Spasiba bolshoy bro the world is no longer divided into: white vs black, rich vs poor or gay vs straight, only assholes and non assholes. Clearly whtaever that haji said bothered you and I appreciate your good character and heart. That is what I judge people on, not things they can't control like skin pigmentation. Because I have blonde hair, I should not be worth more, that is fascism and even fi I am the beneficiary of the system, I will stand up for what I believe is wrong.
Best regards: Komrade Bear- P.S-my nickname in the Navy out of love, honoring German and Russian sides.
Click to expand...
Du lieber freund hAji bruw @TeamMeli, I tell you this, I was brought up in LA, I lived my life among kids with dissimilar bakgrounds and nationalities, my first girlfriend at age of 14 was of mexican descent, my two best buddies when playing football at senior high school football were afrobruws, moreover well articulate fellas.

Now, do you think I even care when a bunch of sexually frustrated old-fart poofta-peasant-hAjies running about here hackin down on black people or armenian?
No, I dont, I just go on rebuke them hAjis only!

Know what brouw, me not a churchgoer (taht I leave to ma 'mom), though a worshiper of Jesus the greatest, the one never defiled hands in the blood of guiltless souls.
There Will Be A Light - Ben Harper & The Blind boys of Alabama

TeamMeli said:
Oh well, it was not all doom and glom for Komrade Bear. Now I can't relate to Turkey like some you because I am not Turkish.
If my eyes are not glued on Iran, they will be on Germany or Russia
Russia 2-1 Slovenia WCQ For Ramstein/Germany fans Deutschland-piano synthestia tutorial
For Germany fans @Kian Pars@Finally @TM_Iran (IDK if you are a Die Mannschaft fan or fan of Ramstein but I have a classical piano background, lerrned from ostad Shahdad Rohani-Improv no notes
Katyuska Piano tutorial since Russia won

Click to expand...
It's time for Klopf to take over...
Likes: TeamMeli

@Kian Pars Between H. Flick and J. Klopp, I see Klopp leaving 6th place Liverpool before Flick leaving 1st place, defending UEFA UCL Baern. He could later on, after Klopp, take over the duties of Die Mannschaft but it's Klopp's time. Leave Liverpool and save Die Mannschaft. Too bad we have to suffer until after the Euros, unless DFB sacks Low now, instead of waiting for him to reading. Only time will tell that but as of now IDK the more prestigious job Bayern FC>Die Mannschaft -Hypothetical Friendly H.F vs J.Low Bayern rs+Leway and German players vs Die Mannschaft-non-Bayern-and other league players for example, Werner Chelsea, Bayern wins.
Last edited: Apr 4, 2021

@Bache Tehroon @Finally Are we doing a Euro or a World Cup pool guys? Let me know if we are.
Likes: Finally

TeamMeli said:
@Bache Tehroon @Finally Are we doing a Euro or a World Cup pool guys? Let me know if we are.
Click to expand...
I’m not aware of it. But, I’ll let you know as soon as I hear something.

UEFA.com will have a fantasy game if they actually play the tournament this year. I can make an ISP league for those who wish participate.

Personally my money is on the China virus/Flu/Common cold propaganda/hysteria to ensure that this tournament gets cancelled. Unless the globalist want to use it in some plot to entice people to get the experimental covid 19 medical treatment that is popularly referred to as a vaccine (although it isn't one.)
Likes: TeamMeli

Khabalood, that would be fine provided I add a stipulation for this pool. We set the fantasy football up so that there is
one payout after group stages, then points reset for the knockout stages and another payout will be given at the end.
We can do it 1st 2nd 3rd 70/30 60/40 however you want to do that. As for China and football, it doesn't mix.

TeamMeli said:
Khabalood, that would be fine provided I add a stipulation for this pool. We set the fantasy football up so that there is
one payout after group stages, then points reset for the knockout stages and another payout will be given at the end.
We can do it 1st 2nd 3rd 70/30 60/40 however you want to do that. As for China and football, it doesn't mix.
Click to expand...
I will not be gambling. Those who wish to do so can make up any rules they want and handle administering that for themselves.
You must log in or register to reply here.
Share: Facebook Twitter Google+ Reddit Pinterest Tumblr WhatsApp Email Link